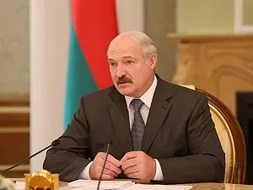 The deployment of a Russian airbase in Belarus has never been discussed. Belarus President Alexander Lukashenko made the statement when answering questions of representatives of labor collectives and Minsk District residents after opening a newly built section of the second Minsk ring road on 6 October, BelTA has learned.

The Belarusian head of state said: “Our opposition has been wailing about the deployment of a Russian airbase in Belarus lately. I know nothing about such plans. I am the man in charge of making such decisions and I know nothing about such plans.” “We don’t need a base these days. We don’t need military air forces either. We need certain weapons. It is what I’ve been saying to Putin and earlier to Medvedev,” added the Belarusian leader.

Alexander Lukashenko pointed out that Belarus is allied with the Russian Federation. “We bear a responsibility, both Russia and Belarus bear a responsibility. We have signed an agreement. As part of the agreement we and they are responsible for the western direction. We don’t stand up to NATO on our own. We stand up together with the Russian Federation. We have a response plan even in case of a war. Naturally we are not going to publish the document, it is absolutely secret but the Belarusian army is the key force in this direction. If a conflict happens, Russia will support us with personnel. Specific armies, aircraft, helicopters and so on have been designated in case of a conflict,” said the Belarusian head of state.

The President remarked: “We need aircraft instead of bases these days. We have excellent pilots, we have fine military and civil piloting traditions. Why would we need to set up a base? Why would we want to bring foreign aircraft and pilots here? What would ours do then?” “We need weapons to enhance the security of the Belarusian and Russian borders. We are not going to travel to somewhere else to fight. I’ve talked about it already,” added Alexander Lukashenko. “I’ve never discussed the matter with anyone. I am surprised and even offended to some degree. Why would Russians have to leak it to mass media now? Are they concerned we are going to ally with the West? Are they trying to get the West to question us and doubt our intentions to normalize relations with the West?” wondered the Belarusian leader. Alexander Lukashenko also warned that “various kinds of provocations, from any side will happen”. “Be very careful and stay alert,” said the President.