Reliable national security is still crucial to the wellbeing of any country. Belarus President Alexander Lukashenko said at the operational meeting of the command staff of the Belarusian Armed Forces on 30 October.

The President said that the spheres of influence are being re-divided on the global scale. The process inevitably leads to the transformation of the current international security system.

According to the head of state, it is obvious that the leaders of major countries are unwilling to take the responsibility for their decisions. In his opinion, double standards consistently dominate the global politics.

According to the head of state, the existing geopolitical realities have a direct impact on Belarus. “Therefore, we should examine a number of the negative trends bearing some risks and challenges to our national security and thus requiring special attention and adequate responses. At the same time it is essential to take into account the peculiarities of the development of military-political situation in the East European region,” the President noted.

“First and foremost, our country cannot but be affected by the crisis in Ukraine. We know the people who were behind and who participated in the coup and the war that began afterwards,” Alexander Lukashenko said.

The President stressed that the radical nationalist groups still active and have the potential. Here and there they try to use force to redistribute the spheres of influence in business. The crime rate and the uncontrolled spread of weapons have been rising. There have been the attempts to smuggle them into our territory. Alexander Lukashenko believes that the obvious foreign political reorientation of Belarus’ southern neighbor towards the West may lead to the deployment of foreign troops on its territory.

Alexander Lukashneko believes that for the first time there is a conflict in the post-Soviet space, the development of which, without any exaggeration, directly affects the security of Belarus. “In these circumstances, it is extremely important for us to maintain the political-diplomatic balance in the relations with Moscow and Kiev. In any situation, we should not be caught up in their confrontation,” the President is convinced.

Alexander Lukashenko stated that Belarus’ active and efficient participation in resolving the Ukrainian crisis was welcomed and supported by the international community.

The President said that the desire of the United States and its allies to sustain their leading role in the modern world remains a source the main destabilizing influence on security in Europe. Alexander Lukashenko said that the depth of aggravation in the Russia-West relations is unprecedented.

According to the head of state, the increasing activity of terrorist groups, national and religious extremist organizations has become a real threat of global scale. Activities of the Islamic State, Al-Quaeda, Boko Haram and other organizations bringing chaos and death have grabbed the headlines in global mass media. Alexander Lukashenko warned against thinking that it happens far away and has nothing to do with us. He stressed that alarming signals can be seen near the Belarusian borders; therefore, the country must be ready to promptly respond to new challenges and threats.

The head of state reminded that this issue was top on the agenda of the recent CSTO summit in Dushanbe, bilateral meetings with the presidents of Tajikistan and Russia. “It is clear that we can find an efficient solution to this issue only together within the framework of joint agreements,” the Belarusian President is convinced.

He said that sanction wars have become a major instrument of achieving political goals for many participants of international relations in the 21st century. The head of state believes that the economic situation of strategic partners and in the world in general cannot but affect Belarus. “We should not forget that our economy is one of the most open economies in the world. It means that it is affected by economic storms happening in other countries,” Alexander Lukashenko noted.

“We have to do a lot to ensure stability and sustainable progress in all branches of the national economy. Meanwhile, rational use of existing material and financial resources, including in the defense sector, is of paramount importance,” Alexander Lukashenko stressed.

The President believes that the economy reform in the country should be focused on manufacturing high-quality goods and selling them at a good price.

The head of state stressed that information expansion has made an integral part of the destructive impact on a state. “It is a powerful weapon to achieve political, economic and military superiority in any confrontation,” Alexander Lukashenko said.

Belarus’ information space is no exception, the President noted. Another wave of Internet attacks was carried out during the election campaign. “Although these attempts ended in complete failure, we need to take into account the importance and significance of information confrontation, in particular in the field of military security,” Alexander Lukashenko said.

The President considers it important that Belarus remains peaceful and stable despite these negative trends, and this is in many ways thanks to the army officers.

Speaking about the performance of the Defense Ministry in general, the President pointed out a normal dynamics of the Armed Forces’ development. Operations held as part of the Belarusian-Russian army exercises Union Shield 2015 and Combat Commonwealth 2015 were a success, the CSTO exercise of special operations units in Tajikistan and the exercise of the peacekeeping units in Armenia were a success, too. Besides, inspections of combat readiness of the Armed Forces showed that the troops and units are ready to execute all missions. “It is a main factor for the military sector and it should remain a priority,” the head of state stressed.

Alexander Lukashenko noted that in spite of objective difficulties the army is supplied with new armament. These efforts will be continued taking into account the country’s financial ability.

The President stressed that Belarusian military organizations should concentrate on the local manufacture of military products, modernization and repair of existing resources.

Alexander Lukashenko said that Belarus has to constantly improve the national defense system, including the territorial one.

“We have to primarily rely on our own forces as far as the counteraction of modern challenges and threats is concerned. Nobody will ever rock our boat if we don’t create preconditions for it,” the head of state believes.

“Take a look around. No modern conflict has been started with the incursion of foreign armies into a country. Nowadays more refined means to an end are utilized but the scenario always starts with efforts to destroy the country from within,” noted Alexander Lukashenko. “This is why the key task is to ensure social and political stability inside the country. We have to prevent chaos and any destabilization of the situation.”

The President emphasized that a new draft military doctrine has been prepared in Belarus. The head of state remarked that this document is to be considered at the session of the Security Council by the end of the year. Apart from that, the Supreme State Council is going to consider a new plan of deploying regional forces by the end of the year.

“Having allies and friendly partners is an important factor for ensuring our military security. Therefore, Belarus views its participation in such interstate associations as an efficient deterrent factor in the military sphere. However, a collective security mechanism should take our national interests into consideration,” Alexander Lukashenko noted.

Alexander Lukashenko pointed out that the Belarusian army has been greatly reduced since Belarus gained independence. The army’s strength has been gradually reduced from 250,000 to 65,000 people without any shocks. “We have reached our optimal number. It is an answer to those, who come up with terrible proposals for reforming the economy these days. It was just like that back then,” the head of state noted. “I would like the composition of all kinds of managerial and support agencies to be revised once again. The revision should be used to reinforce combat elements. Events in Ukraine have demonstrated the importance of combat elements capable of carrying out their missions promptly,” said the President. He went on saying that structural changes have to be implemented while the numbers have to be preserved.

The head of state remarked it is necessary to get rid of vehicles and property, which are no longer fit for military purposes. However, it has to be done wisely, at a profit. Apart from that, it is necessary to continue optimizing army spending and reducing the stock of disused armaments and materiel.

At the end of the meeting the President said that Belarus has evolved into an independent, sovereign European state where peace, stability, and security are reliably ensured.

“Our job is to preserve this accomplishment by any means necessary, including our lives,” the President stressed.

The head of state remarked that protecting the native land is a task for the entire nation. Because nurturing the feeling of responsibility for the motherland’s safety in the citizenry is the key task in the system of measures designed to prepare the country for defense, Alexander Lukashenko believes.

“We can see where the lack of clear ideological and patriotic guidelines, the loss of historic memory and moral values can lead at the example of our closest neighbors,” Alexander Lukashenko noted.

In his opinion, it has to do a lot with forgetfulness about the Great Victory, which is absolutely unacceptable in the Belarusian society. “Memory about the Soviet nation’s victory over the Nazi is the moral reference point, around which citizens of independent Belarus must be consolidated,” the President said.

Alexander Lukashenko made it clear that the formation of patriotic conscience among young Belarusians should be considered the most important target of the ideological efforts exercised by the army with regard to the society. Growing trust of the nation in its army should be the key result of the efforts. “Every citizen of Belarus should feel and understand their personal responsibility for the safety of the fatherland and should be ready to rise to protect the country,” the head of state said. “Don’t forget the most important things that will be important for our soldiers and officers: you have to protect your own family, your kids, your relatives and you cannot leave our population to be ravished by anyone the way it was during the last war.”

“We will be true protectors of our children, families, our senior citizens, women in order to never feel shame for being unable to protect this piece of land and our people,” the head of state concluded. 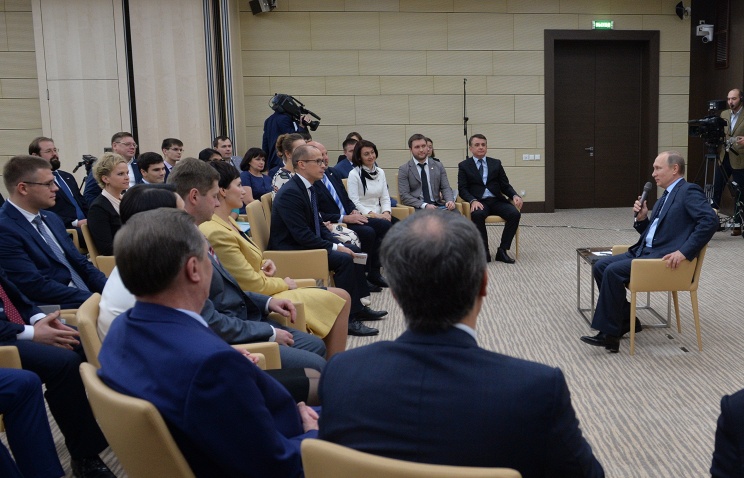